Abrasives are tools used for grinding, grinding and polishing. Most of the abrasive tools are artificial abrasives made of abrasive plus binder, and natural abrasives directly processed from natural mineral rock. In addition to being widely used in machinery manufacturing and other metal processing industries, abrasive tools are also used in the processing of food processing, paper industry and non-metallic materials such as ceramics, glass, stone, plastics, rubber, and wood.

Ordinary abrasive bonded abrasives are abrasive tools in which a fixed abrasive is consolidated into a certain shape by a bonding agent and has a certain strength. Generally composed of abrasives, binders and pores, these three parts are often referred to as the three elements of bonded abrasives.

The air hole acts as a chip and chip on the wear debris during grinding, and can accommodate the coolant to help dissipate the heat. In order to meet certain special processing requirements, some fillers such as sulfur and paraffin may be impregnated in the pores to improve the performance of the abrasive tool. This filler, also known as the fourth element of the abrasive tool.

The manufacturing process of the bonded abrasives includes: distribution, mixing, molding, heat treatment, processing, and inspection. The manufacturing process is different depending on the binder. The ceramic bond abrasive tool mainly adopts the pressing method, and the abrasive and the bonding agent are weighed according to the weight ratio of the formula, and then uniformly mixed in the mixing machine, and put into the metal mold, and the abrasive blank is formed on the press. The blank is dried and then calcined in a kiln, and the firing temperature is generally about 1300 °C. When a low melting point fusion bonding agent is used, the firing temperature is lower than 1000 °C. Then accurately process according to the specified size and shape, and finally check the product.

The resin bond abrasive is generally formed on a press at room temperature, and is also subjected to a hot press process which is heated while being heated under heating. After molding, it hardens in the hardening furnace. When the phenol resin is used as a binder, the curing temperature is 180 to 200 °C.

The rubber bond abrasives are mainly mixed with a roller machine, rolled into a thin sheet, and then punched and formed by a punching knife; and some are loosened and put into a metal mold to form on a press. After molding, it is vulcanized in a vulcanization tank at a temperature of 165 to 180 °C. 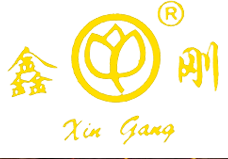